A DARK ELF BY ANY OTHER NAME SHOULD BE SO... WHITE?

If you read yesterday's review of White Dwarf #43 you would have seen the image (below) in that issue of some kit-bashed Elven Heroes.
The image really inspired me, so I decided to go through my bitz box and make my own Dark Elf Champion/ Hero!
I pictured this Champion as a Master of Blades, surrounded by Dark Elf Black Guard, so I used them for the main body.
The head is from the Sisters of Slaughter box which was hollowed and trimmed to fit on the head mount for the normal head.
The arms are from the Black Ark Corsairs, one crossed over his body and the short sword pulled back by his side as if to parry with the large sword and strike with the short sword.
He looks pretty good next to the Black Guard, and as a first try I'm pretty happy! 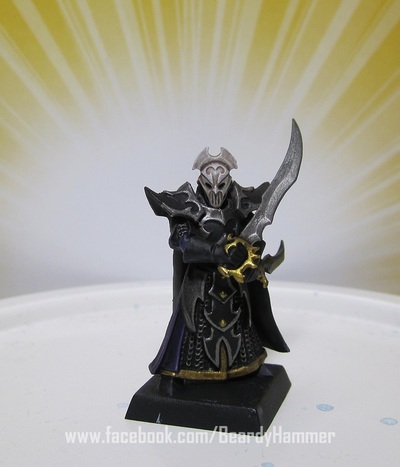 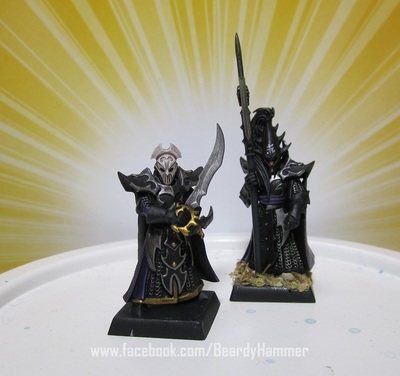 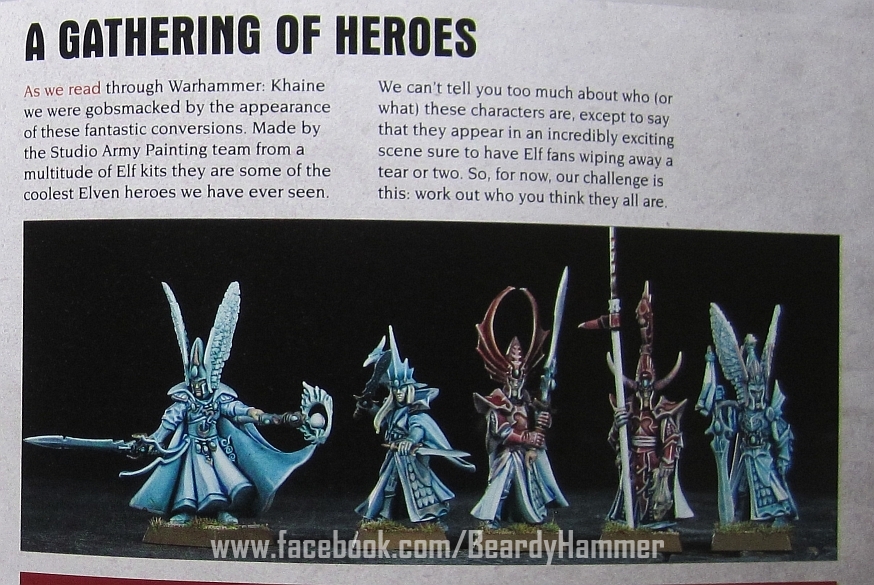 Hand on heart - I LOVE Dark Elves! What's not to love. riiiight?!
Well as soon as the Dark Elf Riders were released I knew I had to have them. They were the 3rd string in a dual box with the Doomfire Warlocks and a assassin looking Dark Riders - the helmeted variant were just in there for fun, not pictured much until I spotted them trying to hide... very Dark Elf!
The paint job was pretty tricky in spots due to the odd assembly of the rider and horse (see the Sprue Breakdown below).
Now I've seen the issues, painting the horse with the hips and legs attached, then paint the torso and the rest of the miniature would be the best way. Aaaaahh, hindsight!
Anyway, I kept the palette very limited with this guy - just grey on the horse, black on the rider with the purple matching the Black Guard underneath the Dark Rider's cape - I figured if they were being stealthy, then flashy purple would be the way to go in the dead of night. 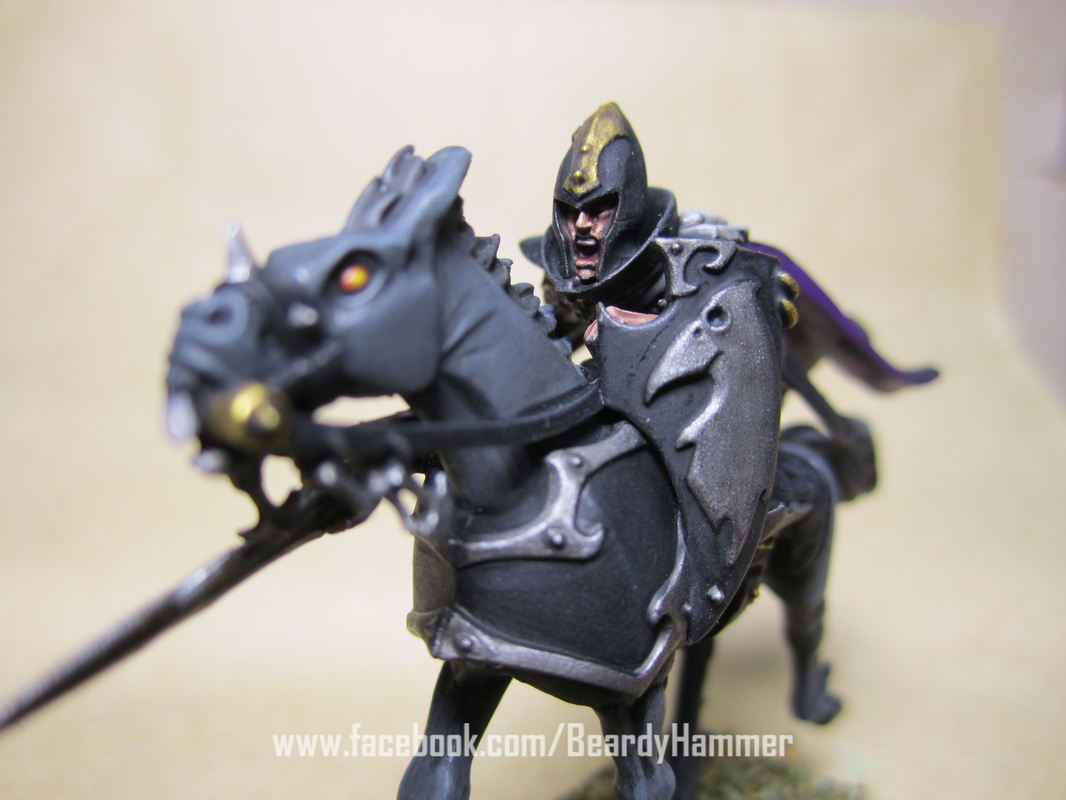 I mainly stuck with dark metallics to show this was not a highly ranked soldier or an elite rider of any sort. I did add the touch of gold to his helm for a bit of contrast though. More then anything I wanted him to look like he[d be in the same force as the Black Guard guy (below).
Overall I'm pretty happy with him and using the basing I showed you in the basing tutorial, he came up a treat!
May 2014

~ BE WARNED - I'M NOT A PHOTOGRAPHER - SO CRAPPY PHOTOS BELOW ~
On first impressions this may be one of the simplest kits GW have brought out, in terms of construction, in some time.
They are very static and perfect for ranking up.
Which is both positive and negative, but firstly, lets have a look at the unusual construction method involved.
Body Assembly
Heads
Effectively being two kits, there are head options, but on inspection they are certainly limited - I suppose that fits the mood of the subjects!
Arms
The arm assembly is interesting.
There are two variants for the halberds on the Black Guard and the Executioners double-handed blade keeps half of the hand on the hilt,. the rest on the arm...
Verdict
Overall it's a nice kit - static, but nice.
It's a real shame the torsos aren't separate. I can see why for the Black Guard, but the executioners would have looked cool with twisted waists as if about to attack or mid swing!
I do wonder if GW are getting rid of the poseability of their kits? It would be a real shame if they did!
The Build

~ BE WARNED - I'M NOT A PHOTOGRAPHER - SO CRAPPY PHOTOS BELOW ~
My first impression of these guys was "Wow, those Warlocks suck...". Then I saw the Dark Riders and the helmet options and just HAD to have them!
Body Assembly
Heads and other bitz
Put simply - there are a lot of heads in this kit!
You get the Warlock heads, the Dark Rider hemleted heads, the Dark Rider scarfed heads and the bare heads... you're just spoilt for choice!

The Warlock heads. They're actually more like masks and attach to the hair really. Nicely sculpted, but more fodder for the Bitz box I think. 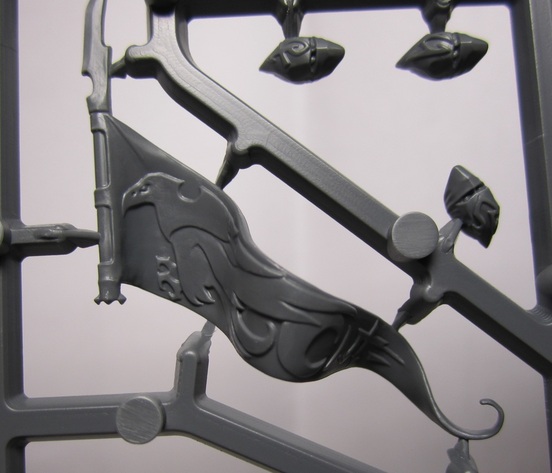 Truly one of the nicest banners I have seen on any miniature in a good long time. It falls very nicely, isn't too thick. A lovely job!
Verdict
As a kit I wasn't waiting for as much as others, this one really impressed.
There are so many options in here: the Warlocks of course, but you can also have light cavalry, skirmishers, stealthy scouts, hooded assassins on horses - so many bits to play with.
Of all the kits so far - this is the one I would get first!
It will build well, paint nicely and add real flavour to your army.
I will honestly be getting more!

Are the Dark Elves GW's Most Exciting Miniatures?

We got our hands on the Witch Elves/ Sisters of Slaughter kit and this is what we thought!
05/10/13

It's with great excitement I see that the Dark Elves in the Games Workshop universe are about to get a relaunch!
25/09/13