The Many Projects of Beardy Hammer's Distracted Mind!

I have been painting miniatures, on and off, since 1985.
I started when D&D turned out to be... well, boring - certainly for a 12 year old.
The entry point was the then-non Games Workshop Citadel Miniatures range in lead - aaaah yes, lead!
Then when the plastic boxed Fantasy range and Space Marines were released, I was hooked.
So many conversion possibilities!!
~ So enough of all that ~
As well as GW Fantasy and Sci-Fi, I also do other manufacturers, plus Historical in a variety of scales including the occasional vehicle.
So here we go then - i'll mainly be showing the 25/28mm Heroic Scale miniatures...

Ever since completing my Red Box Games Goblin Archer, I have been pondering how to base my fantasy miniatures. I explored flock options from a few brands but found them to be too yellow - then today I was reading online that some people use herbs from their supermarket.
Genius! 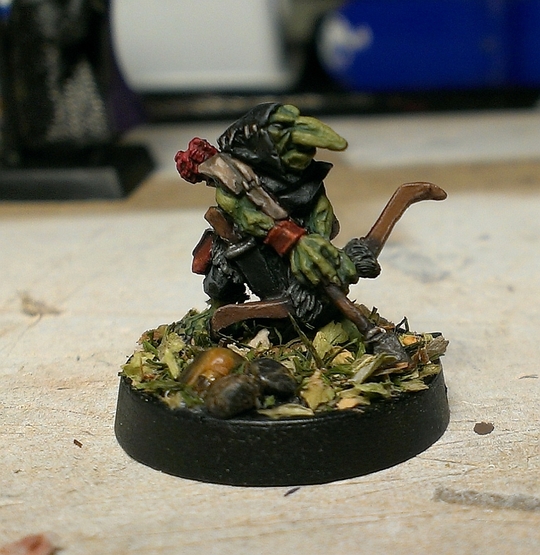 ... and this worked out better than I thought! The Dill Tips stand up like random undergrowth - perfect for Goblins waiting in ambush. For Elves maybe something more lush, but this isn't a bad start... and it smells pretty good too!

How the Internet brought the original Marine chapters back to us

June 2013
UPDATE
Thanks to Bell of Lost Souls' "Gotthammer", here are some much larger images of the original colour schemes from the original Space Marine game box. 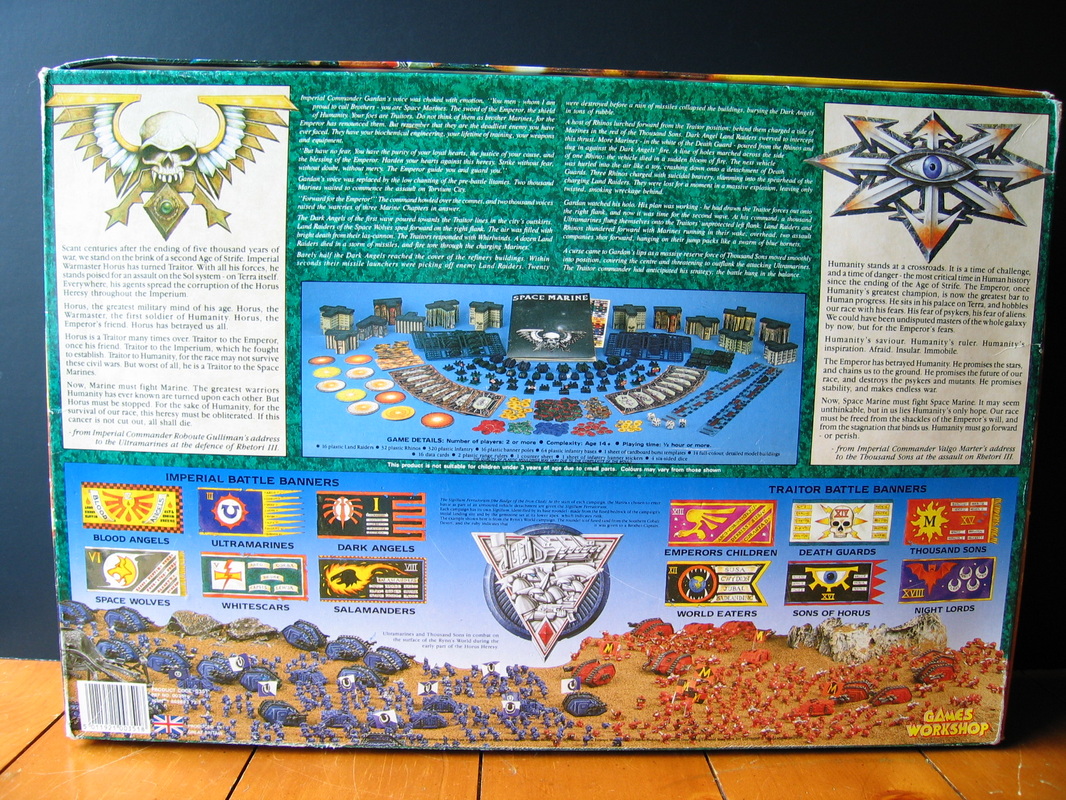 The Consecrators first appeared in the Codex: Dark Angels (4th Edition) in 2007 and in an almost whispered tribute to all Dark Angels fans who had been through so much upheaval as the original Rogue Trader colour scheme was changed, the back story twisted and characters came and went, the Consecrators were a breath of fresh air to Dark Angels players who could now field an army using the colour scheme they knew and the older equipment.

The only change from the original Dark Angels iconography was the Chapter symbol which replaced the sword between the wings with a flame and an Iron Halo above the wings.
As far as back story goes, according to the Lexicanium:

The founding of the Consecrators is unrecorded and their early history totally unknown. Prior to the 3rd century of the 40th millennium there is no record of their existence. The chapter was first recorded in the works of the Administratum field notary Corwen Quilp, where at the height of the Second Kuppukin Schism, the entire Chapter appeared to annihilate the entire rebel force over six hours before vanishing once more.
They were again absent from recorded history until three decades later when the chapter's 4th company was seen fighting alongside the Dark Angels at the Arrulas Intervention.
They appear to have inherited the most revered arms of the Dark Angels Legion, preserving them carefully through the ages. They bear a close resemblance to the Dark Angels before the Horus Heresy, maintaining the legion's original black colour and wearing the older Mark 6 "Corvus" pattern power armour.

With that in mind, and wanting to try some Rogue Trader era colour schemes, why not try to paint one? 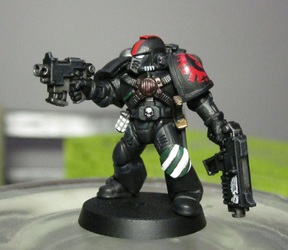 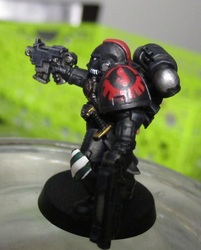 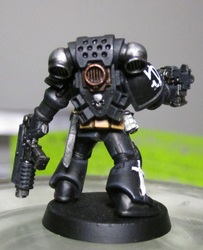 A Tau Envoy Escort... and a glimpse of something potentially exciting to come!

Every model painter needs an assistant! 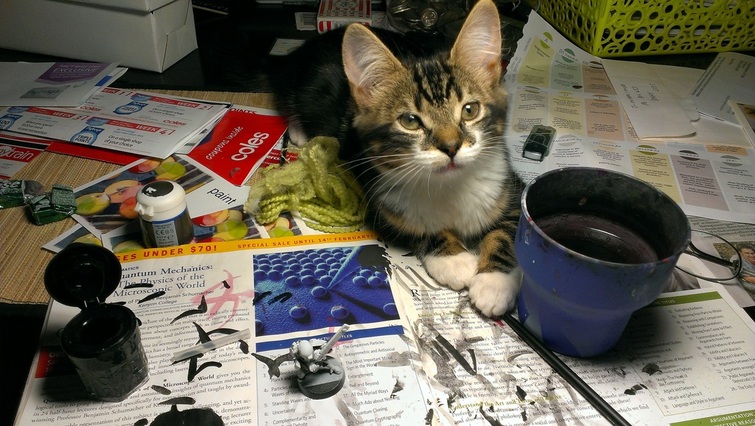 The much vaunted Horus Heresy armour patterns have been universally heralded with the kind of geek-gasms usually reserved for leaked pictures of a naked Star Trek crew member (usually female - but it's 2013 - let's live a little people!)
I have built a few of the normal infantry, Mark 3, 4 and 5 (oh Heresy Armour I love you!) - but the new Terminators marks were on my wish list.
Well thanks to my friend Rob, no more!!
I have some - plus all the extra weapons - oh by the Gods must be crazy... YES 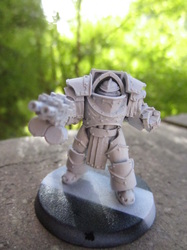 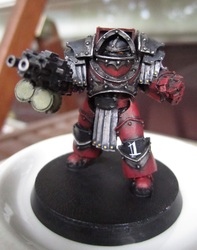 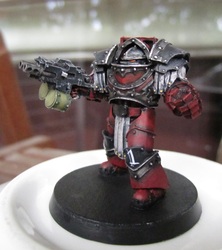 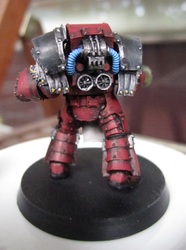 So it's done!
And the lesson learnt?
Pint it in bits before you put it together!

A simple looking miniature, yes, but the intricate detail, and the hanging armour from the shoulders makes it hard to get to all th detail once assembled.
It's easy enough, just paint the inside of the arms and torso, then assemble.
Definitely trying this next time!

So what's it like?
It's a very nice mini, but like much of Forgeworld, it's not entirely finished.
There was bubbling on some of the surfaces that were supposed to be smooth, or clean lines were marred by loss of crispness.

Look it's very very nice - the faults are typical of Forgeworld - not the fault of the model per se.

So I really like inventing Space Marine Chapters.
If you didn't know, Space Marines are part oft he Warhammer 40,000 Universe.
They've been around since the late 80's and I've been fiddling with them - off and on - since then pretty much.
So one of the things I like most is the plastic medium - you can cut them apart and glue them in all kind of cool poses.

In my time I have invented a number of different Chapters (basically independent small armies in power armour) and some of them have grown, others just die.
It's like a real war, just without the TV coverage and the word "hero" being bandied about.

So here are a few of the more recent ones I have done.
They are quite heavily converted, but made to look realistic.

Great conversion bits for your army?

If you like miniatures, you HAVE to try this site: http://victoriaminiatures.highwire.com/
Victoria Lamb produces some great pieces and some brilliant conversion bits at affordable prices.
You have to check out the goggles and gas masks amongst the other things.
The service is fast and efficient PLUS it's likely you will get a free gift with your purchase.
GO NOW - you won't be sorry!

So i'd thought of moving the bolters from the handle bars down to the wheels. It seems more logical in a way and the result really works! It's fiddly but simple. The paint work on this wasn't as good - so here's the conversion. It's all you're getting! 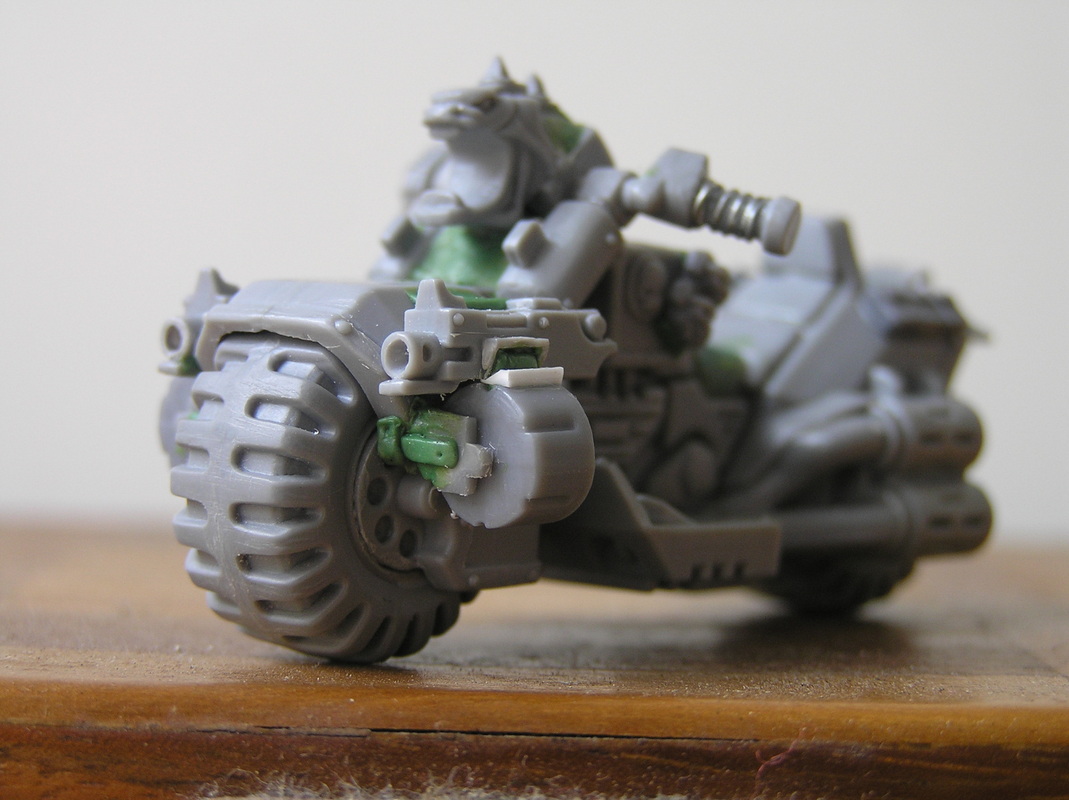